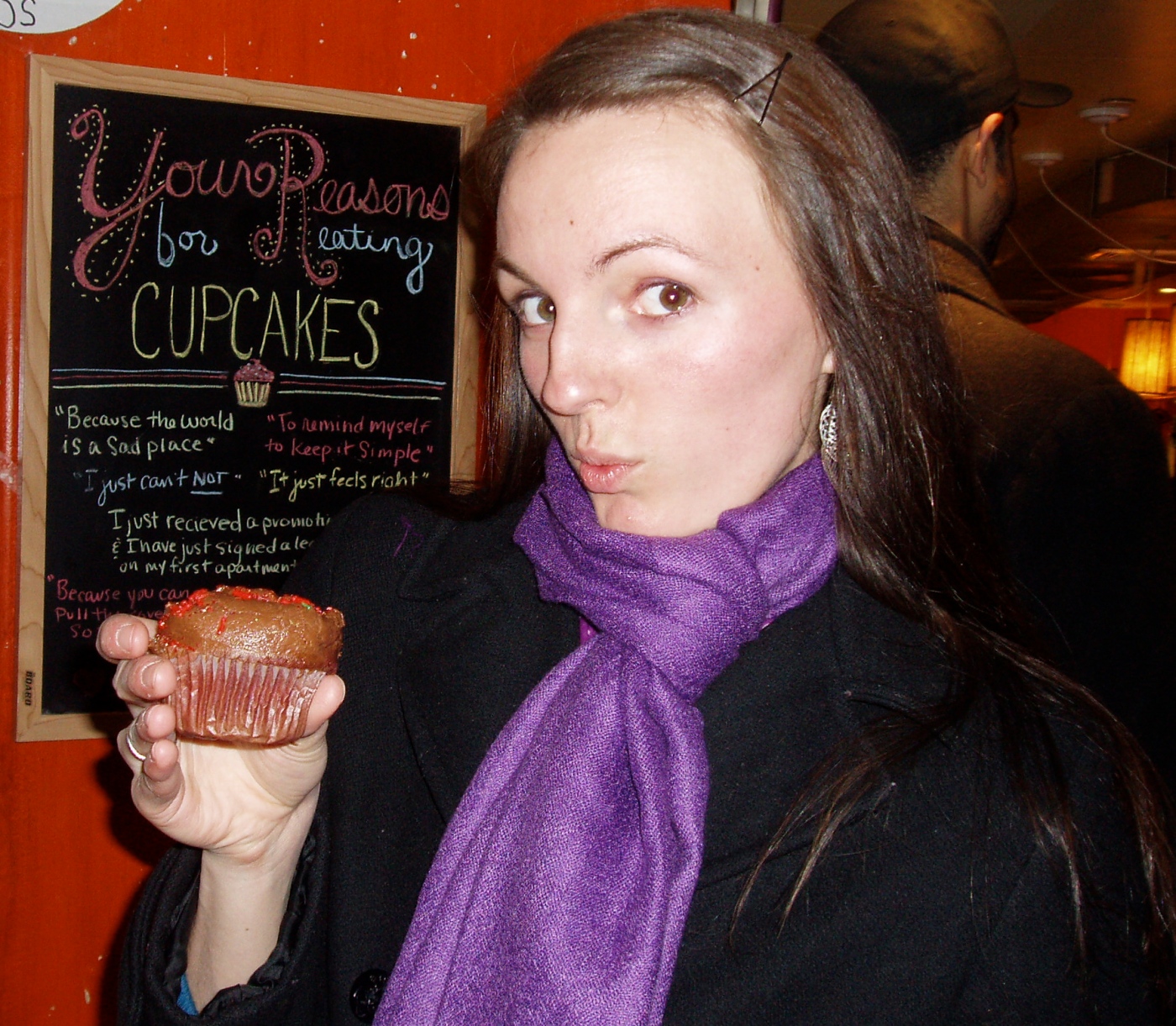 Here I sit – recounting my trek around NYC on Saturday whilst nibbling on some red velvet cake. What? You actually thought I’d be eating something else when writing about my adventures in the great NYC red velvet search? Now, that’s just silly.

Saturday, I journeyed to NYC to see Mr. and Mrs. Fitch (with John Lithgow, haha! It was pretty good, except I kept picturing his as Dick from “Third Rock from the Sun” many years ago…oh well!) and, in continuing my search for the best red velvet cupcake in Manhattan, happened upon three different cupcakeries, cafes and the like; two intentionally, one spontaneously. And to answer your impending question – Yes, I came out of this adventure completely unscathed…with only the slightest hint of a red velvet coma. Here’s the breakdown:

Crimson & Cream – A delightful raspberry red velvet cupcake from Sweet Revenge down in The Village. The hint of raspberry was a nice twist and the cream cheese frosting was actually one of the top I’ve had throughout this quest (most just use butter cream…there IS a difference!) Overall, it was alright. The cake was a tad dry. Not a destination cupcake though.

Sassy Red Velvet – That is its actual name, by the way. A red velvet cupcake with chocolate butter cream frosting from Sugar Sweet Sunshine. Verdict: Eh…the chocolate frosting was kind of a refreshing change, however, this cupcake further reinforced my feelings about cream cheese frosting being the one and only with which to frost anything red velvety. And this is coming from a self-proclaimed, serious chocoholic. The cupcake was fine, but the combination just didn’t fly with me. So I polished it off after lunch today in utter protest.

Red Velvet Cake – Ah, Amy’s Bakery in Hell’s Kitchen, you get an “A” for the day. The cake was super moist and while the website describes the cake as having a white butter cream frosting, it had a cream cheesy overtone. Let the record show that this was not a cupcake, but a slice of red velvet cake. There is a difference (maybe not to you, but in Natalie’s search for the best red velvet cupcake in Manhattan, there IS…baking cupcakes just right seems trickier than getting a cake just right, but I’m not a baker; just a consumer). The frosting was quite dense and not actually cream cheese, but complimented the light cake very well. I’d possibly go back if I were in the area but, again, it’s not a destination red velvet in my book.

Wow, I think my red velvet standards are just too high. That, or a place that actually makes red velvet with true cream cheese frosting is too rare a find. How I got on such a red velvet kick recently is anyone’s guess. Never in my life did I think I’d devote this much time, energy, money and waistline in this quest for the best.