When The Boy and I moved into our apartment in Princeton in August 2013, we had recently traveled up to Providence, Rhode Island to see some friends and enjoy some theater…naturally, we came back with a growler from Trinity Brewing Company (like ya do). Not quite knowing what to do with the growler, we just set it next to the TV and, at some point, started tossing spare change into it, joking that it was our “vacation fund.” The change slowly began to accumulate and before we knew it, the growler was overflowing! So what did we do? Why, get another growler, of course (again, like ya do)! Though this time we kept it local and went to Triumph Brewing Company in Princeton.

Earlier this summer, we booked a trip to Walt Disney World over Halloween weekend. After that, the growlers really became the legit vacation fund. As many of you probably know, I worked seasonally for Disney for many years following my College Program in 2006 and had to let it go (haha, #disneypun) two and a half years ago (Intrigued? Get the full story here: The Dog Days Are Over). I haven’t been back down there since May 2012 and, among many other things, need to re-acclimate myself to full-price Disney (castmember discounts were amazing and so good while they lasted).

Well, the long-awaited magical trip is about a week away now (oh bother, where are my Mickey ears?!) and last night was finally the time to check in on those vacation funds. Here’s our M.O., coin by coin (ok, not really, we didn’t want to nickel and dime you with too many details):

Step 1: Pour thyself a drink (in our case, Michter’s on the rocks).

Step 2: Put on a Disney movie (Nightmare Before Christmas…appropriate, no?) 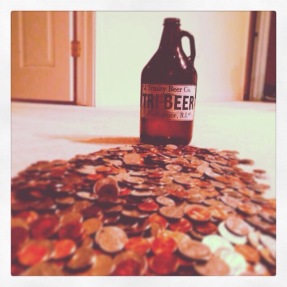 Step 5: Add up each set of coins…by hand…twice…write it all down and do the math…by hand.

Step 6: Put the numbers in Excel to confirm the bourbon-induced math is correct.

Step 7: Separate the coins in bags to take to the bank whilst thinking about the plethora of ways to spend the money at the happiest place on earth (Hello, Epcot Food and Wine Festival!).

Two Michter’s on the rocks, 2668 coins (including two Sacagawea dollars and coins from Canada, Jamaica, Ecuador, and Europe), two empty growlers, and 75 minutes later and…drum roll, please…we have a grand total $223.57. How amazing is that? Fourteen months of accumulating loose change, wow it all adds up! We were a little too overwhelmed to think of anything specific to splurge on at the moment, but I have no doubt we’ll come up with something and—I’m going out on a limb here—I know it will be simply magical.