First of all, three things:
1. I know it’s already January 5, but I needed time to ruminate
2. New Years resolutions aren’t my MO (that phrase has such a stigma…not a fan)
3. I forgot what this one should be…oops

I was reminiscing over what I wrote last year at this time (in case you’re mildly curious: 12 for 2012) to see what I’d actually accomplished. Out of the 12 things I set out to “work on” in 2012, I only saw eight through semi-successfully (over 50%, not too shabby I suppose). I ran a 5K, saw a lot of theater, traveled to many new places…my biggest über fails from last year were timeliness and not resuming work on the quilt I started making by hand a few years ago. It’s still tucked away safely in a box. Good place for it, no?

For 2013, I’m deciding to simplify. Literally. As I was going through photos for the WordPress ‘My 2012 in Photos’ Challenge last week, I came across this photo I took in New York City in early November that pretty much sums up the three areas of my life that I want to simplify this year. 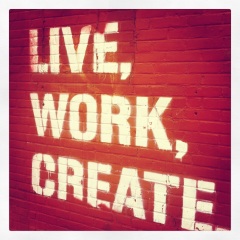 To live, work, and create simply…that’s what I hope for in 2013. Something just clicked when I turned 27 last month and for whatever reason, I feel like more of an adult (Shit, how did this happen? I don’t even know what I want to be when I grow up yet!) and just want to simplify. Everything. And I’m not wasting any time.

This weekend I have absolutely no plans (well, except to watch my Green Bay Packers pulverize the Minnesota Vikings at Lambeau Field tonight…) and intend to purge the living hell out of my apartment. Do I really need that box filled with papers, scripts, and random stuff I packed up when I moved to Rhode Island in 2009 that I haven’t looked at in the last 2.5 years since I’ve been living in New Jersey? I think not. Or that pair of colorful Roos from my early character days with Disney in 2006 that are taking up precious space on my shoe rack? Seriously. No.

Putting your goals for the new year in writing for all to see makes you more accountable for them, no? There’s no going back now. About an hour ago I came across this article on the Huffington Post that was really the icing on the proverbial New Years resolutions cake:

“It’s not about stopping, giving up, and doing nothing.
It is about doing things differently”
– Kevin Cashman, A Year of Pause

I couldn’t agree more. And with that, happy 2013! May it be a year of transformation, making good choices, opening new doors and closing old ones that get you down, being your best self, and simplicity. Cheers.