Tonight, The Boy and I finally decided to go for it: conduct a completely impromptu pumpkin beer tasting with our two favorites, Weyerbacher Imperial Pumpkin Ale and Southern Tier Imperial Pumking Ale. We’ve been Weyerbacher snobs for quite some time now, but this past weekend at a frequent NYC haunt (for amazing pickle backs, ironically) we discovered Southern Tier and figured that it was time to compare the two side-by-side. How each beer fared surprised even us. But first, time to hallow out the pumpkin with the down and dirty details: 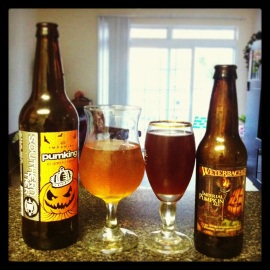 Our scoring metrics were straightforward: color, nose, taste, finish, bottle design, and (gotta get a little technical here) pumpkiness on a scale of 1-5 with 5 being the highest. Note: we did not share our scores with one another until the very end. Not only were we eerily similar in our overall scoring, we were also surprised that we both came to the same conclusion. The Boy accurately summed it up: “I’m shocked. Thought I’d be Weyerbacher through and through…I surrender to the Pumking!”

Here’s the thing about the Pumking: the pumpkin smell, flavor, and taste was absolutely pumpkin to the core. The Weyerbacher (previously touted as our #1 pumpkin beer) masked the pumpkin behind the spices a bit giving Southern Tier the edge. The category I had the most trouble with was bottle design (shocker).

While I prefer Pumking because of the style and the little story/text on the side, I let my Weyerbacher bias creep in (seeing as we’ve been to the brewery, took a tour, and generally prefer it to most craft beers…yeah, we’re ridiculously bias) and called it a tie. Yeah, we did this on Chicago Shakespeare Theater note paper (#noshame). Let’s cut to the cards:

After a long, wacky day at the theater, generous handfuls of hint of lime Tostitos, and this wonderfully impromptu beer tasting, we played a much-needed (and delightfully entertaining, I might add) game of Super Smash Brothers and enjoyed the remaining Pumking…which happened to be in a Weyerbacher cuvee glass. #nojudgement

One thought on “Who’s the King of the Pumpkin Beer Patch?”