Confession: despite being from Brew City, I haven’t always enjoyed beer. In fact, it wasn’t until moving to the East Coast that I became a bit of a beer snob; specifically, a Wisconsin beer snob.

We take our beer seriously in Wisconsin. From Lakefront Brewery in Milwaukee (OMG best brewery tour I’ve ever been on!) to Capital Brewery in Madison and a recently discovered favorite, Central Waters in Amherst (excellent coffee stout!), Wisconsin is chock full of amazing craft brewers. But the first Wisconsin brew I introduced to The Boy, as well as many of my co-workers, was of course none other than New Glarus Brewing Company’s claim to fame: Spotted Cow (naturally, followed by Fat Squirrel and a seasonal fave that’s now extinct, Laughing Fox). Spotted Cow is a refreshing farmhouse ale and, according to someone who shall remain nameless, “there’s a cute little cow on the label.” What’s not to love? Plus, it’s pretty much a guarantee in any bar in the state. For the win!

While enroute to Madison last weekend for the wedding of a childhood friend of mine, we took a slight 45 minute detour (or perhaps pilgrimage is more apropos?) southwest of Madtown to New Glarus to hit up the brewery. Following a fish fry at a little dive bar and pre-gaming with a New Glarus sampler (4 samples for only $5.50…I love Wisconsin prices), we headed to the brewery with only about an hour to spare before their 4pm closing time.

Set atop a hill just outside of the downtown New Glarus area, the brewery itself is as amazing as the beer (and we didn’t even go on a tour!). The outdoor area has a “ruins” type feel to it as you can see in some of the photos below (I was also having way too much fun my new camera and was fascinated by how the sun lit up the beer and really brought out its color…spoken like a true Wisconsinite, no? Or a photography/beer weirdo, take your pick!). We sampled nearly everything they were offering! New faves were the Scream IPA, Two Women, and the Strawberry Rhubarb specialty, though we also sampled the Back 40 Bock, Serendipity, and Totally Naked. Yes, we got Totally Naked in New Glarus (wink, wink). Though we only had time for a quick tasting (and it’s about a 2 hour drive from Milwaukee), New Glarus is definitely worth the trip through all the farm fields of southwestern Wisconsin for any lover of local craft beer. We definitely plan on going back for the infamous hard hat tour! After all: Only in Wisconsin! 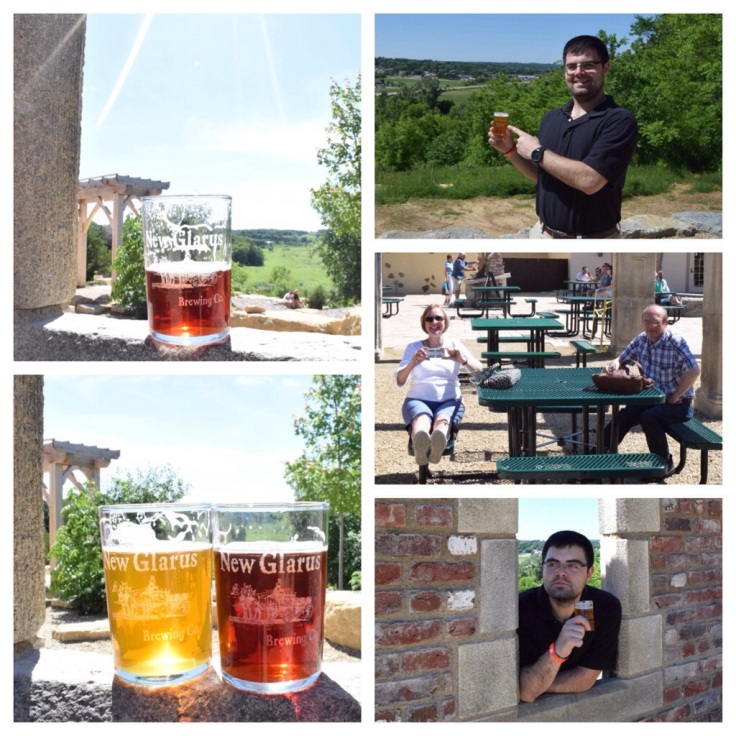 One thought on “The Wisconsin Brewery Mothership”

EZ 15 min beginner @onepeloton ride today to get the legs moving a bit. Still getting the hang of riding (I’ll get used to the seat eventually, right? 😂😬) but it’s a nice cross-training addition to the weekly schedule - can’t wait to explore more rides and see the effects on our running. 🙌🏻 Shoutout to @cdavis07 for jumping on the saddle this year and encouraging me to try it! 😘
Sunday strength! 💪🏻 Focused more on legs/lower body tonight since we ran yesterday - kettlebell deadlifts, squats, single leg deadlifts, & curtsy lunges. Plus some front/side raises, lat pull-downs, overhead presses, & single arm rows. Adding in strength training consistently these last few months has been a nice change of pace - and a great complement to our running. 💪🏻 #progressnotperfection Can’t wait to see all this hard work pay off this year! 🏃🏻‍♀️ Also took my new Zoom Freaks for a spin - love the extra cushioning over my old pair of trainers. And the color is 🔥🔥🔥
These are the faces of two runners who crushed their 6-mile run! 💪🏻 On tap today: 3 miles at 9min running x 1min walking, then running 3 consecutive miles. Negative split those last 3 miles (!!!) in 21-degree temps and ended with a 63-ish min 10K, which is a great non-racing time for us. 👍🏻 Making strides one day, one run at a time! 🏃🏻‍♀️🏃🏻‍♂️ It always helps to have an amazing running partner. 🥰😘 @cdavis07 #NatConTraining #packerbackers #runningcouple
Rest day vibes! ✨😁☕️ Slept in till 6:30 this morning, had a bagel and schmear, and enjoyed a @starbucks dark roast as I strolled to work on this chilly sunny Friday. After yesterday’s speed work, my legs are feeling great and energized. Lovely feeling on a Friday heading into a long weekend. 🙌🏻 Reppin’ my @packers swag for Green & Gold Friday - big game this weekend! 💚💛 #restday #packersnation #gopackgo #GGfriday