Remember that time The Boy and I decided to intentionally miss the last train back to New Jersey from Penn Station on a Saturday night, wander around the city during the wee hours of the morning and then watch the sun rise from Coney Island? We do (though some of it’s a bit fuzzy). Thank goodness for photos, lots of water, Evernote, and enough sense and clarity to jot things down so we wouldn’t forget. It’s all about the strategery, my friends. And now, for your amusement, our epic NYC adventure of this past weekend:

7:08pm | Sat down at Jacob’s Pickles on 84th and Amsterdam with two bourbon cocktails and pickles…and Dave. This place is ahhhhmazing. Definitely one of our favorites. 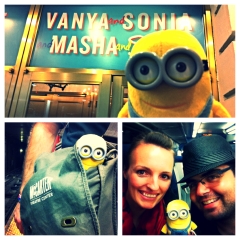 8:51pm | Took the minions to see Times Square and were reminded of how much we dislike that area and the people at any time of day.

9:14pm | Bowlmor Lanes at Union Square to cosmic bowl, foosball, play air hockey…with Dave (and Dave too). As luck would have it, I was testing out Instavideo and inadvertantly captured The Boy bowling a strike. #winning

11:19pm | Boarded the L train to Brooklyn. “I’m so excited to voluntarily go to Brooklyn!” (said no one ever)

SUNDAY:
12:10am | Grabbed cereal from the all-you-can-eat cereal bar, ordered a Sonny (a White Russian topped with Cocoa Puffs…highly recommend it!), and settled in for what would ultimately be a mildly disappointing trifecta of cartoons: Daria, Are You Afraid of the Dark (yes, we were all aware that was not a cartoon), and Spawn (Did anyone ever actually watch this show? Save yourself the time and don’t). Twas entertaining, but would most likely not do it again.

1:49am | Left the place where fun goes to die, aka Brooklyn (woo hoo!) #pasttheppointofnoreturn

2:22am | Attempted to go to Revisions in the East Village, but the music was too loud and the scene outside was delightfully sketchy, so we walked around for a bit. Ended up at The Belfry, treated ourselves to picklebacks (a shot of Jameson followed by a shot of pickle juice for all you newbies out there), and commandeered an outlet to charge our phones to a whopping 40% battery and then headed on our merry way.

4:11am | Hopped the L train heading west, and walked down to Christopher Street to grab pizza. The Boy put on his hipster fedora (bought specifically for the purpose of going into this jazz club) and we waltzed into Fat Cat but didn’t get carded cause it was after last call. An absolutely pitiful game of pool ensued and we then got kicked out because it was 4:55am #ourbad #lastonesout

5:04am | Swiftly strolled to the D train and headed toward Coney Island. We made it to 5am! [see picture to the left…we look pretty awake, no?]

5:52am | Arrive at Coney (gosh there’s a lot of trash thrown about on the streets). There was a thin layer of fog and clouds hiding the sun, but as we strolled along the boardwalk marveling at the surprising amount of people  up so freaking early on a Sunday, it began to emerge. Final boardwalk thought: The Boy needs to write an album since we’ve already shot the album cover: 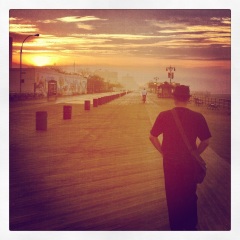 6:32am | Left the boardwalk, grabbed a coffee and chocolate donut from Dunkin’ and dragged ourselves up the stairs toward the Q train to head back to Manhattan.

7:40am | Trudged toward Penn Station and got a proper breakfast: egg white, avocado, and white cheddar sandwiches from Au Bon Pain. SHOCKER: no coffee appeared at this performance.

8:01am | Used a wall to prop ourselves up while we waited for the train and grazed on some egg white, cheddar, and avocado sandwiches and charged our iPhones (45% battery this time! #solid). We were in complete disbelief that we were still standing. “How do these kids do it?” #gettingold

8:14am | Train leaves Penn Station and we are en route back to Princeton, iPhone alarms strategically set to wake us up at 9:20…couldn’t have us completely asleep that we miss our stop and end up in Trenton.

9:58am | Made it back to the apartment in one piece! And with no concept of what day or time it is, we collapsed into a 4 hour nap…with Dave (and Dave).

[Flash Forward]
Sunday – 11:58pm | Miraculously, we are still awake. Though too tired to actually finish the blog post…which we just finished now…on Thursday morning. Moral of the story: we’re glad we did it, but would not intentionally do it again…maybe. #jurysout