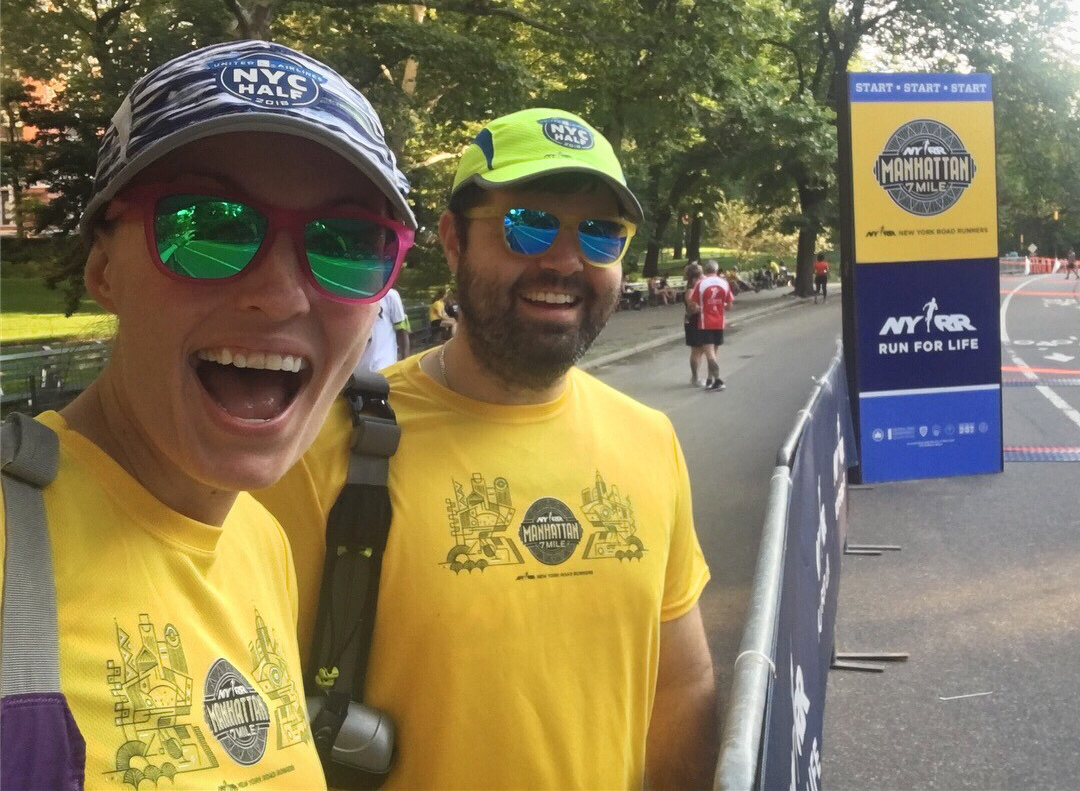 Since someone loves summer running more than I do (…sarcasm), I’m turning the blogging reigns over again this week. Here’s the latest post from Connor’s Corner Column:

The beginning of August brings the promise that the end of the extreme, harsh summer temperatures is in sight. The only caveat; they still can rear their ugly heads resulting in some unbearable and often nasty conditions.

Last Sunday, we felt the full force of this during the New York Road Runners inaugural Manhattan 7-Miler. The pre-race forecast called for a heat advisory beginning at 10 am; the race began at 8 am. We were hopeful that a quick jaunt around Central Park was possible, but boy oh boy were we sorely mistaken. Here’s our before photo:

Temperatures were already in the mid-80s by the start of the race. Usually NYRR races have a vibrant hum of excitement in the corrals, but on this day there was a more tepid hush. It seemed like everyone knew what the next 7 miles would bring: a tough, challenging, and hot outing.

As we started, it was very obvious that when we were protected by the shade the temperatures were tolerable-ish, but the moment the sun hit, you could feel the energy begin drain out of you.

Based on the success of the previous week’s long run, we upped our running segments to 35 minutes running by 5 minutes walking. Our fueling strategy was to #PopDatGu (let’s make it a thing readers!) at the first walk break and then take Cliff Blocks at the 2nd walk break, in the hopes that it would carry us to the finish.

We felt pretty good during the first 3.5 miles and the hills of Central Park didn’t feel as bad as they have during other races, verifying that some of the hill work we’ve been doing will hopefully pay dividends come November.

However, once we got up Harlem Hill the heat of the day sucker punched us with a wallop of fatigue. Legs felt like lead, breathing felt like sucking wind through a tiny straw, and ultimately we shifted our race strategy to just finish the dang run!

We abandoned the 35-minute run segment idea and went back to our tried-and-true 9 minutes running by 3 minute walk segments to cover the final couple of miles. It was a gritty, teeth-clenching finish and were more than happy to drink all the Gatorade and water that was available to us. Very thankful for the cool cloths the volunteers were handing out afterward too. Post-run feels:

Looking back we probably went out a bit too fast, too early on for the conditions. And after much sweaty contemplation along the rolling hills of Central Park, we are thinking of going back to our 9 minute/3 minute run/walk segments for the rest of the summer long runs to make sure we keep our speed in check and can safely cover the distances we need to.

While the Manhattan 7-Miler may have been rough for us, we can only imagine that we built some mental toughness that will be called upon further up the road. We are certainly no fans of running in the summer heat (you may have heard this before…?), we have felt that these last two months have been a great success so far. This summer is probably the most consistent we have been in terms of making our runs happen and that is something that we are very proud of.

The dog days of summer may still be here, but the thoughts of the sweet, cool, breezy, leafy (need I go on?) fall running weather will keep us getting up in the morning.

2 thoughts on “The Dog Days of Summer Running”